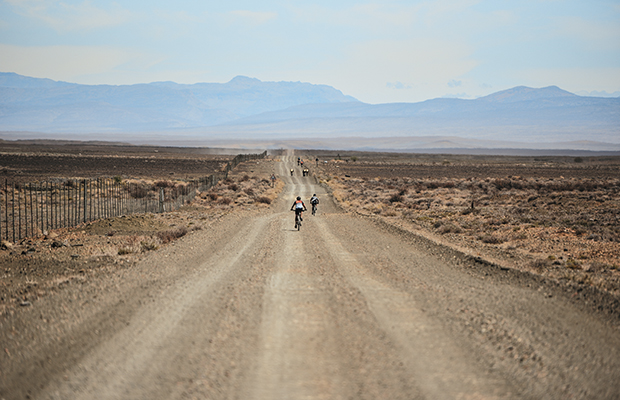 From Adventure races that took over 30 hours to complete, to running the 68km Maxi Race — the Karoo Burn is still hands-down the toughest race I’ve competed in. That’s probably the exact reason why I loved it. Here’s what went down…

Bicycling Magazine’s Karoo Burn is a 242km race from Calvinia to Ceres along South Africa’s longest, straight gravel road. If you’ve been to Afrika Burn you’ll know this treacherous road — mainly for its tyre puncturing capability and lack of signal (lack of everything really). Some smartass thought cycling this road would be a jol — and looking back now, it was.

READ MORE: “The Longest 24 Hours Of My Life Were Spent At The WCAD 24H Adventure Race”

Around 4 pm on Friday the 21st of February, my sister (and racing partner) and I headed up to the Northern Cape. After navigating the work traffic, spirits were high as we powered towards Calvinia. There was a bit of karaoke, snacks (because carbo-loading is a thing) and the bants of two Silly’s heading on an adventure.

We stopped for a classy super at a Wimpy in Klawer. By this time it was already quite late and it was becoming apparent that we’d be getting to Calvinia after 10 pm. More like 11 pm. We rolled in with minimal signal and a hostel address that did not return any results on Google Maps. By this time we were so exhausted, that the car was actually looking like a good nap option. As fate would have it, we stumbled upon the hostel by accident. Everything was open but there wasn’t a soul in sight. The only issue now would be finding an unoccupied room.

The only logical way to figure out which rooms were taken seemed to be…well opening the door and looking inside. I began opening a few but every room seemed to be full of sleeping cyclists. Of course, I was as sneaky as possible. Finally, on the third floor, I saw the light — quite literally, shining through an open door to a fully vacant room! Victory (and a bedroom) was ours. 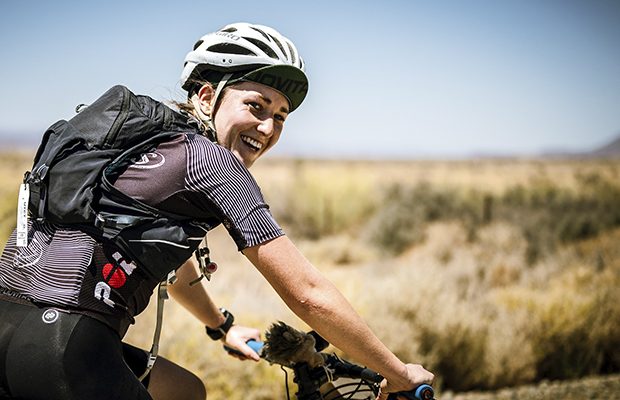 We quickly sorted out a few race things, set our alarms for 7 am and went to bed. Luckily the race start was only at 10 am.

I woke up at 6 am when some noisy fellow cyclists went showering but I couldn’t really kick up a fuss as I had been opening random doors close to midnight. I decided to quickly go through the rules for the race to double-check I hadn’t missed anything. With a feeling of mild panic, I realised our boxes for the checkpoints needed to be in by 8 am. It was time to get up and get sorted.

With our boxes checked in and our registration complete, we headed to breakfast. There was a slap-up English brekkie, as well as oats, cereals and what can only be described as a proper koshuis meal. We feasted as we knew we’d need all the fuel we could get. With our tummies full, it was time to line up and embrace those 242kms that lay ahead.

10 am: off we went. The first 5km was a neutral zone and only once we were out of Calitzdorp and safely on the gravel road could we race. My sister and I picked up a pretty nippy pace and things were looking good. Or so we thought… When The Going Gets Tough

The thing about this race is that it’s on a very long, straight road so there’s a lot of riding in one direction. This is all good and well unless a strong headwind picks up and you have no choice but to ride into it for around 175km. At sections of the race, it was so strong that we were getting sandblasted. Bibs and I teamed up with another strong lady, Rebecca who has outridden her partner and was planning on waiting for him at the next checkpoint. The three of us battled through the sand storm rotating the lead position and the rest catching a bit of a break behind the leader. It got to a point where I was counting each km by glancing down at my Garmin every few seconds. It became a brutal mental game to keep persevering from waterpoint to waterpoint.

READ MORE: Exactly What To Do And What To Eat Before (And On) Race Day

At around 9 pm we reached the checkpoint where our warm tops were waiting for us in our box. We ate, enjoyed a hot choccy and some time off the legs. There was a sheltered, warm room that we probably spent a little too long in but boy was it good. Eventually, the reality hit that if we spent any longer in this warm haven, we’d never leave. Back on the bikes, a mere +/-60km to go.

I’d be lying if I said the last few km’s were easy. Yes, the wind was now predominantly behind us but there were new obstacles in the form of heat exhaustion (I even stopped for a little vom sesh), never-ending uphills and sand. It was pitch black and our path was lit by our bike lights and the trillions of stars above our heads. Although the exhaustion was very much real, the magic of this scene was not lost on us. There is something so incredible about riding through the absolute silence of the Karoo by night. The route was well marked and at no point did we feel unsafe or lost. Around 1 am we reached the last water point. With a hot coffee in the system and only 19km to go, our mental game was back on track.

The last stretch was probably the sandiest section of the race but we squiggled our way closer and closer to the finish. The thought of a hot shower and bed driving us forward. From 10 kays to go there was a count down of signs and each km felt like a massive achievement. With around 3km to go, a mixed team came past us. Although we were riding as a ladies team we wouldn’t let them pass us without a fight. Challenge accepted! Back in the lead, we sprinted to the finish leaving them in our dust (we were too broken to look back and see whether they were chasing). At around 3 in the morning, we had finally completed what can only be described as the toughest race we’ve ever riden to date. Nothing else even came close. 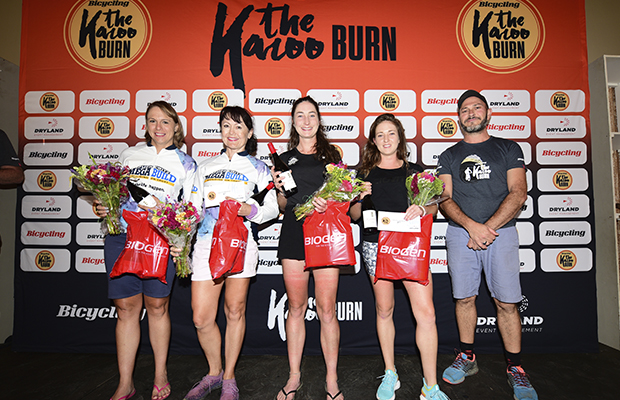 The second ladies team across the line at the Bicycling Karoo Burn.

No shower has ever felt as good, and no bed has ever been more loved. We had to be up and ready by 8 am for prize giving as we’d managed second place for the ladies. Safe to say the podium pics aren’t the freshest. With a few hours of sleep in the system, we were more stoked than ever that we’d completed this challenge. We were also 100% committed to the Karoo Burn 2021. This time we’d be going for the win.