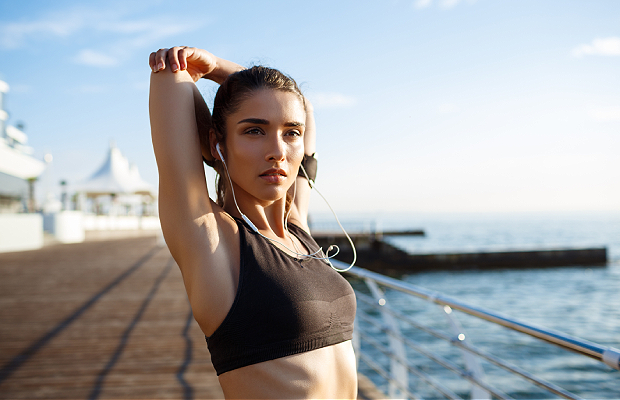 While walking is clearly a form of physical activity, it doesn’t always get the cred it deserves. Especially if the option of running is available to you, you might wonder if walking actually counts as a workout on its own.

For the record, experts say yes, walking is a legit way to exercise. “Like many cardiovascular exercises or activities, walking at an appropriate intensity can help strengthen your heart and make it more efficient, burn some extra calories, improve respiratory functions, and elevate your mood through the release of endorphins,” says Doug Sklar, a personal trainer and founder of New York City fitness training studio PhilanthroFIT.

Of course, there’s a huge difference between going for a leisurely stroll and walking like you mean it. And how does walking really compare to running as a workout and way to lose weight? Here’s what you need to know about walking for exercise, plus how to maximize a walking workout.

Things like your weight, metabolism, speed, and the incline you’re walking on matter when it comes to calorie burn, says Albert Matheny, a nutritional advisor to Promix Nutrition and co-founder of SoHo Strength Lab. In general, you’re looking at about 100 calories per 1.6km if you’re moving at a brisk pace.

If you want to kick things up a notch, you can try walking up stairs or on a stair climber if you’re lucky enough to have a home gym, says Matheny. Again, there are a bunch of variables involved in this, but he says you can burn roughly 200 calories for every 1.6km if you’re walking up stairs.

So, if you walk 1.6km, you’ll burn about 100 calories. If you have the time to walk eight to 12km, you’ll probably burn 500 to 800 calories (about the same as running or biking for an hour). And if you take it to the stairs, you’re on a whole different, well, level.

How does walking compare to running when it comes to weight loss?

While walking definitely burns calories, running will help your burn a lot more in less time. “Walking is considered low intensity and while you still may lose weight, running burns more calories, which will result in a greater weight loss overall,” says trainer Alesha Courtney.

Again, just how many calories you’ll burn will depend on your metabolism, says Courtney. It will also depend on your weight, speed, distance, and effort, says trainer Ash Wilking.

Adding an incline to your walk or run may also increase the amount of calorie burn. A 65-kilo woman running on an incline of five percent might burn about 128 calories per 1.6km. If the same woman was running up flights of stairs for nine minutes (or realistically jogging), she might roughly burn about 154 calories, according to Wilking.

READ MORE: 5 Reasons Why You NEED To Start Walking More

Speed also plays a factor in calorie burn. For example, a woman walking on a flat treadmill at a pace of 3.0 could be expected to burn around 70 calories, but if she increases her speed to 4.0, she could possibly burn an additional 10 calories per kay, Wilking says. Add an incline and she might burn three to five more calories per minute, possibly adding a 50 to 60 percent increase in calorie burn per mile.

Basically, running burns more calories than walking if you’re doing them for the same amount of time, but increasing your speed, distance, or incline while doing either of those activities will boost your calorie burn.

How do I know if walking or running is the right cardio workout for me?

If you’re not as fit as you’d like to be, walking “can help tremendously,” says Matheny. He calls walking “a great entry point for a lot of people” and says it’s a “key foundation to have in place for getting in shape.” And yes, this “counts” as cardio. “Any physical activity that elevates your heart rate above its normal resting rate can be considered cardio,” says Matheny.

Walking is also really easy to do, he points out: “You can do it anywhere, it’s easy to get started, and there’s no setup time.” And, if you want to lose weight but are nervous about diving straight into higher-impact activities, walking can help you lose body fat upfront, before you add in other types of fitness like running or biking, says Matheny.

That said, how much walking helps you with your fitness depends on your baseline, says Sklar. If you regularly run half marathons, it’s unlikely that adding walking to the mix will do much to move your fitness forward. But if you tend to be pretty inactive, walking regularly can do a lot, he says — and then you can push it to the next level.

If you’re just starting out, “aim for a low, attainable walking time that doesn’t seem overwhelming,” says Sklar. (This makes it more likely that you’ll continue, he says.) Then, over a period of a few weeks, increase the time and intensity of your walking — that’ll help you keep seeing benefits over time, says Sklar.

Wilking says your choice should also depend on your physical condition, what your goals are and how much time you’re willing to put into training. “If time is of the essence, running is the best way to maximize calorie burn.”

Wilking also says you should pass on running if you want to avoid putting too much strain on your muscles, say, if you’re recovering from an injury. Since running is a high-impact exercise, it can put lots of stress on the legs, hamstrings, glutes, the core and even the shoulders. Your body only absorbs 1.5 times your weight while walking, while running requires it to absorb nearly 3 times your weight, says Wilking. “Running will require higher stress on muscles. So walking would be a great way to still find a calorie burn without requiring high effort from muscles.”

Other high-intensity, low-impact cardio workouts you can consider include rowing, swimming and climbing stairs.

How much should I be walking or running per week for weight loss?

If you want to walk for weight loss, which is best for people who are new to fitness or recovering from injury, Wilking recommends walking five to six times a week. Since walking can burn calories and increase your heart rate without too much effort from your body, you can do it more often and for longer durations.

Running, on the other hand, is a different story. Wilking recommends running three to four times a week with rest days and cross-training sessions scheduled in between those days. “Running creates a higher and quicker fatigue on the body.”

In terms of what pace you should walk or run, Wilking suggests monitoring your heart rate. “Heart rate tells us how long we can keep the effort that we’re in.” The slower your pace, the longer you can go in running or walking.

Keeping track of your heart rate will also let you know when it’s time to go a little harder. “If walking is no longer increasing your heart rate into a cardio zone, and you are healthy enough to add small bouts of jogging, that’s a good sign that maybe it’s time to start.”