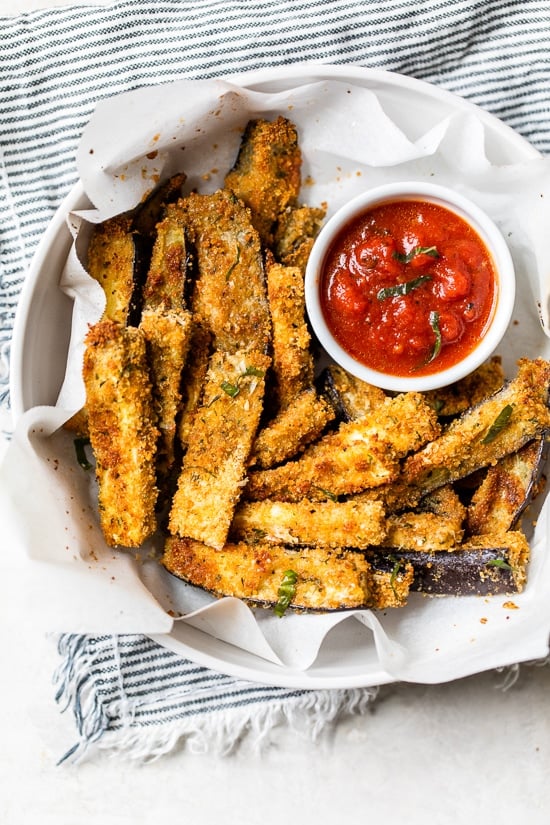 These Baked Eggplant Sticks are breaded with Italian breadcrumbs and Parmesan, baked or air-fried until golden, and served with a quick marinara sauce. 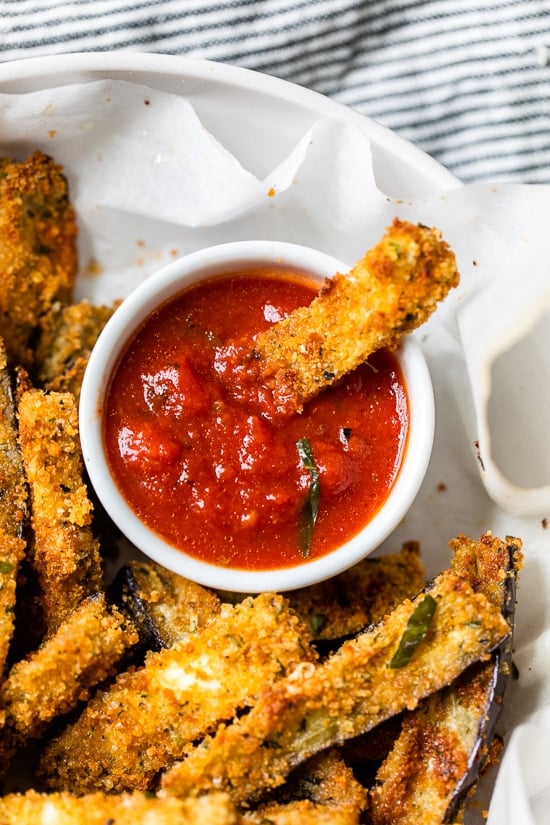 These crispy baked eggplant fries are a delicious way to eat eggplant. They are perfect served as a snack, appetizer, or side dish. Eggplant fries are made even better with a dipping sauce. I make my quick marinara, but you could also use a jarred sauce for dipping. If you want a main dish, try this Eggplant Parmesan, another favorite. 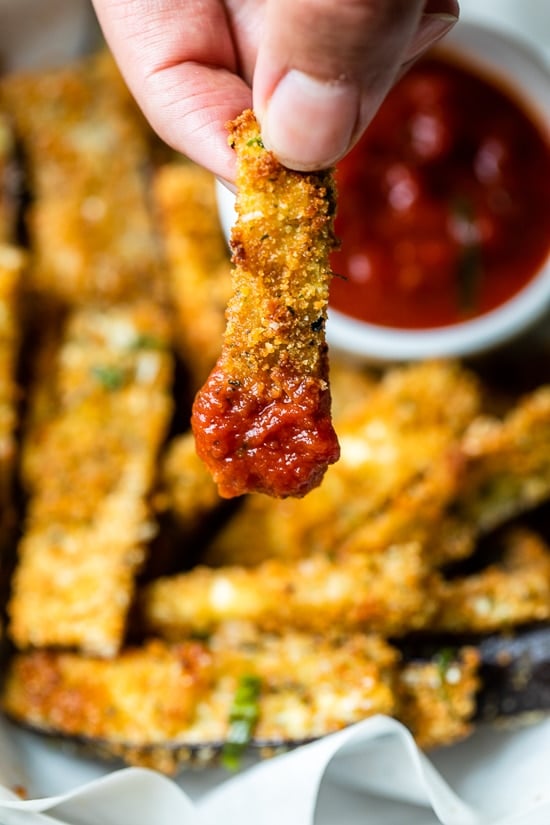 I can vividly remember the day when my picky older daughter, who was in middle school at the time, told me she liked eggplant. Eggplant? Really? She was eating dinner at a friend’s house, and they served breaded eggplant for dinner. She loved it. Kids are always more willing to try new food when they are eating with their friends. I was delighted she liked a new vegetable, and for a while, I made breaded eggplant for her at least once a month, only I baked the eggplant instead of frying it.

Eggplant may not be for everyone, but if you like eggplant or want to try introducing it to your family, eggplant fries are a good place to start. Crispy on the outside and so tender on the inside, they use less oil than fried versions. Eggplant is rich in antioxidants, vitamins, and minerals, like vitamins C, K, and B6, manganese, and potassium. It is also a good source of fiber and low in calories and carbohydrates.

There are many varieties of eggplant. Typically, you can only find a couple types in supermarkets, but farmers’ markets can have a big selection when eggplant is in season. Japanese eggplant is a bit sweeter and milder than globe eggplant, also known as American eggplant. Globe eggplants are the most common variety. They are large and have a meatier texture, which makes them perfect for this baked eggplant recipe.

How to Cook Eggplant Sticks

First, cut your eggplant into strips and then season with olive oil, salt, and pepper. Next, prep your breading station. Put the egg white in a bowl and the breadcrumbs and Parmesan in another.

Now, it’s time to bread your eggplant. Put a few strips in the egg white and then in the breadcrumbs. Once the eggplant is coated, place on the baking tray. Spray the coated strips with olive oil and bake for ten minutes at 450 degrees. Flip the eggplant and bake for five more minutes until golden.

How To Make in the Air Fryer

You can also cook these eggplant fries in the air fryer. They turned out so crispy! Put the sticks in the basket in an even layer, careful not to overcrowd it. Spritz with olive oil spray. Air Fry for 350F for 10 minutes, turning halfway. 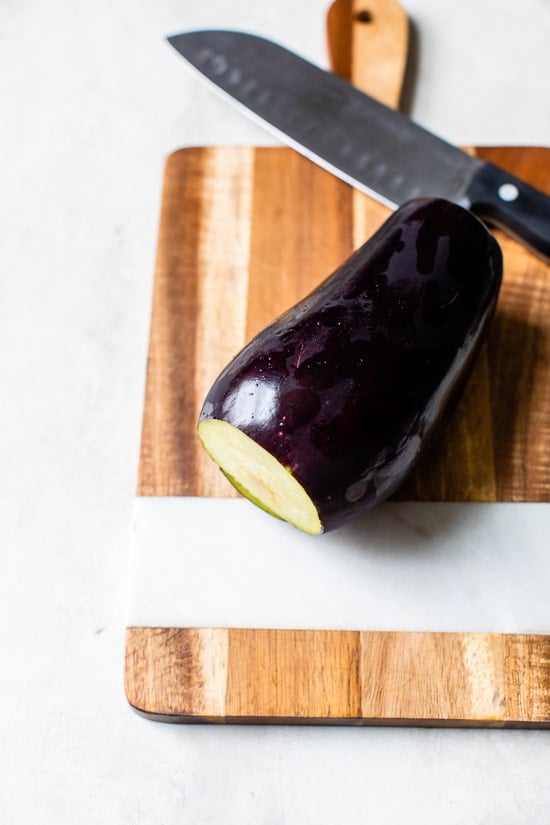 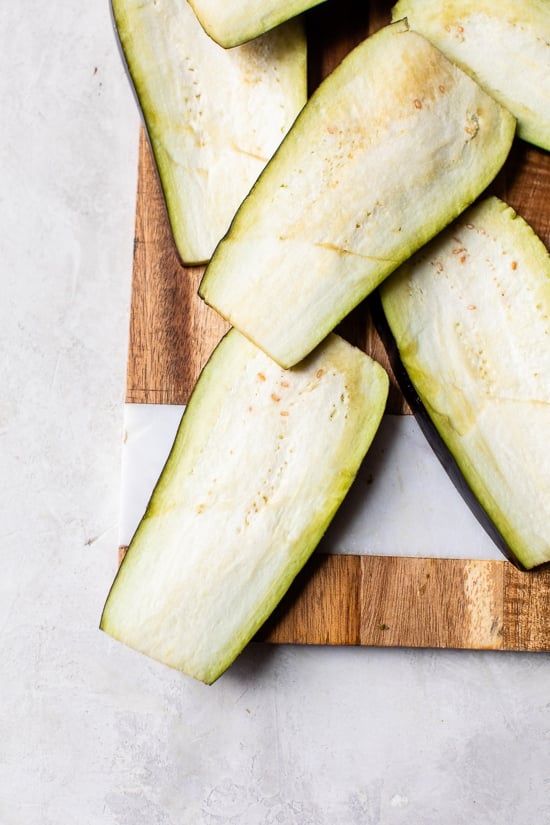 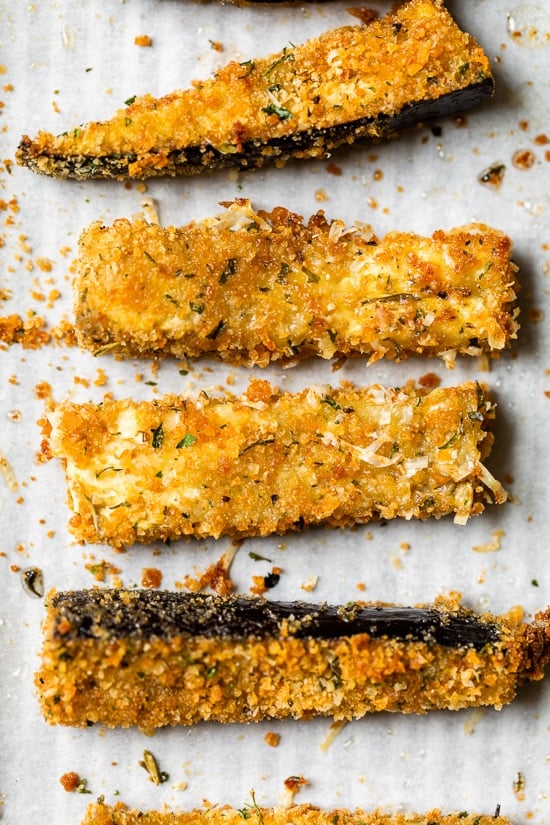 More Eggplant Recipes You Will Love:

These Baked Eggplant Sticks are breaded with Italian breadcrumbs and Parmesan, baked or air-fried until golden, and served with a quick marinara sauce.