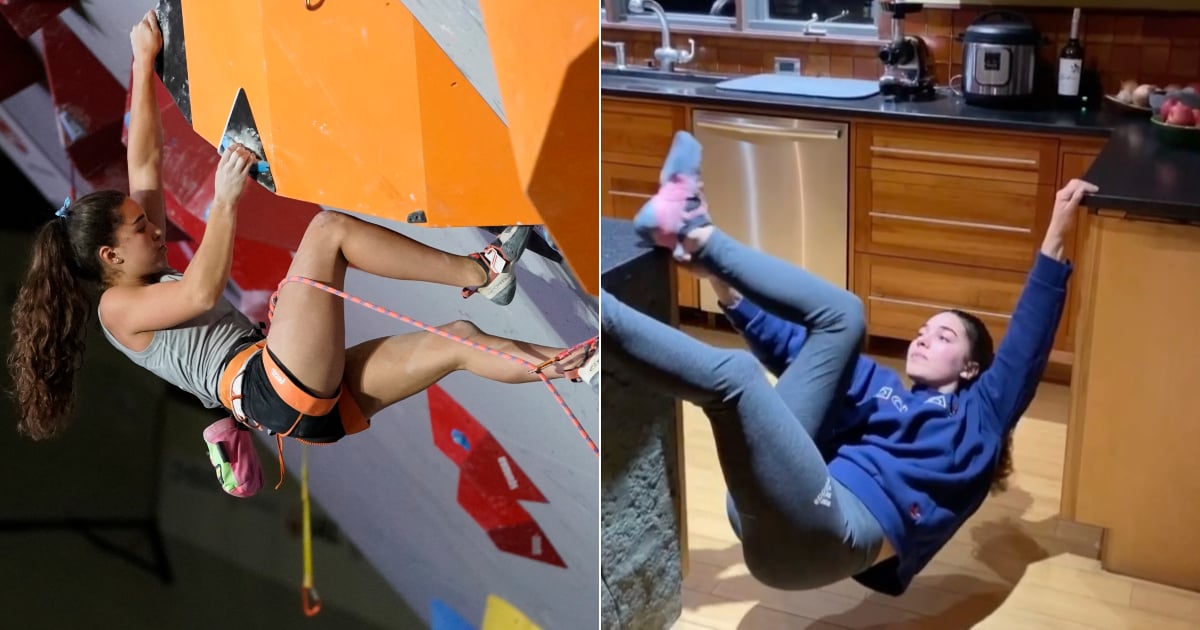 Brooke Raboutou is one of many Olympic-qualifying athletes getting creative about their workouts during social distancing. In August 2019, Raboutou became the first American athlete to qualify for sport climbing, which was slated to make its debut at the Tokyo 2020 Olympics. Raboutou, a 19-year-old from Boulder, CO, belongs to a family of champion climbers and was immersed in the world of grip strength and boulders from a young age.

Raboutou was one of the athletes who saw her Olympic ticket postponed to the summer of 2021 due to the novel coronavirus pandemic. That ticket is still valid — she and fellow US climbers Kyra Condie, Nathaniel Coleman, and Colin Duffy will all retain their individual spots since they qualified through their international sport federations. Now it’s just a matter of holding tight and keeping up with training until next year.

There will be three disciplines in Olympic sport climbing: lead climbing, where athletes climb as high as possible within a specified time frame; speed climbing, where two athletes race against each other; and bouldering, where they try to scale a number of fixed routes in a specified amount of time. “It’s not just about being strong,” Raboutou told Rolling Stone, “but solving the problems in front of you.”

Raboutou, according to the outlet, practices climbing for up to 11 hours a day, doing shoulder-mobility exercises and building up grip and upper-body strength (pull-ups and “dangling by three fingers from a ledge,” for example). But, she has to make do while her normal gym was closed amid the pandemic. When she’s not using a wall set up in her basement, she improvises, practicing around her house.

Ahead, check out Raboutou hanging from her fingertips in her home like a true pro. She scales her kitchen counters to go get a snack and even climbs over her fireplace! Don’t try this at home unless you’re up to speed with this rockstar; walk on your own two feet to open the fridge instead.