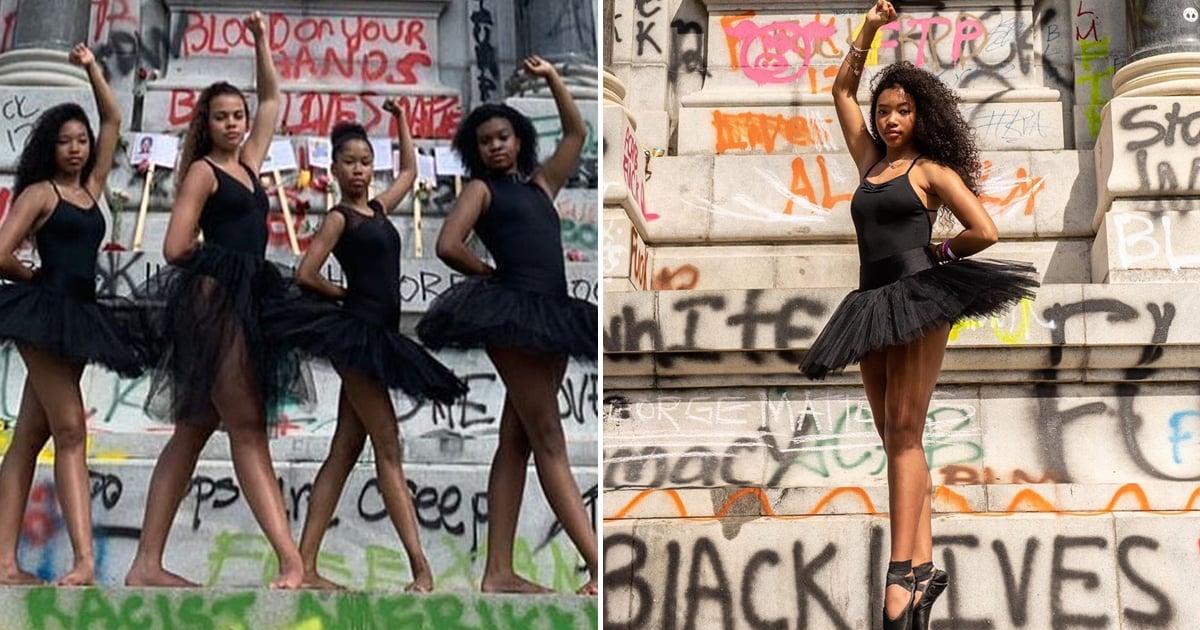 Ava Holloway and Kennedy George are 14-year-old ballet dancers at the Central Virginia Dance Academy, and they’re using their love for dance to spread a powerful message about the importance of Black lives. Following the announcement on June 4 that the Robert E. Lee statue located in Charlottesville, VA, will be removed, Holloway and her fellow dancers took the historic opportunity to pose in front of the now graffiti-covered statue of the Confederate soldier before its official removal. The resulting photos, taken by photographer Marcus Ingram and George’s mother Chris, share a powerful message of hope for the future.

“The inspiration was to say goodbye to the past without forgetting it,” Holloway told POPSUGAR. “Ballet is one of the hardest types of dance; we are going through a very hard time. I connected a time full of hate with something that gives me so much joy . . . What better way to bring the best out of something by doing what you love?”

“I just hope someone that had a different opinion relates to the picture and has a change of heart.”

The long-overdue removal of the Confederate statue comes after an impassioned week of protests across the country in support of the Black community and the eradication of racial injustice. “It’s time to acknowledge the reality of institutional racism, even if you can’t see it,” Virginia Governor Ralph Northam said in his public address. “Today, Virginia is home to more Confederate commemorations than any other state . . . The statue of Robert E. Lee is the most prominent . . . Yes, that statue has been there for a long time. But it was wrong then, and it is wrong now. So, we’re taking it down.”

In celebration of the statue coming down, Holloway and her friends hope to remind others of the past and inspire the people of today to be better than their ancestors. From left to right, the above photo features Kennedy George, Sophia Chambliss, Brandee Greene, Shania Gordon, and Ava Holloway. “We are so grateful for everyone that reposted us and didn’t think that it would get nearly as much attention as it is receiving!” said Gordon.

As for the message she hopes these photos will send, Holloway said, “I hope people reconsider their thinking . . . I just hope someone that had a different opinion relates to the picture and has a change of heart.” See more photos of the group’s powerful photo shoot ahead.