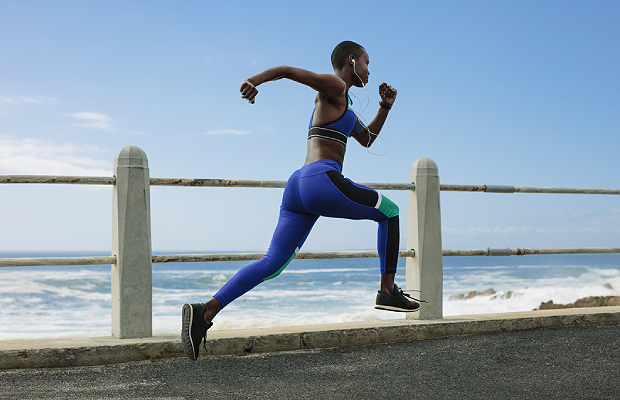 When you think of sculpting your arms or building strong legs, you probably think about bodyweight moves like pushups and equipment like dumbbells and resistance bands. Do you have to swap the sidewalk for the weight room, though — or does running build muscle, too?

Though most people categorize running as cardiovascular exercise, that doesn’t mean you can’t do more than boost your heart health and increase your VO2 max (a.k.a. peak oxygen capacity) while putting in the kays. Steady-state running and sprint workouts have very different effects on your body, says running and speed coach Katrina Pilkington. How much muscle you build running ultimately depends on how you run.

Before we get into that, however, you should know that there’s one major caveat to running’s muscle-building potential. Don’t expect it to build up your biceps because you’ll likely only see gains on your lower body.

With that in mind, here’s everything you need to know about building muscle while running — plus how to switch up your routine to make pounding pavement (or, er, the tread belt) as muscle-friendly as possible.

So, how does running build muscle, exactly?

First, a little muscle-building 101 for you: “Muscles grow as a result of a stimulus (stress) being applied while they contract,” explains Pilkington. This stimulus causes micro-damage to the muscle, and then your body mobilizes an immune response to repair it. Over time, those repairs build muscle. Pretty cool, right?

There are two ways running can put this necessary stress on your muscles, according to David Higgins, celebrity trainer and author of The Hollywood Body Plan.

The first occurs via your horizontal movement through space. “Your body has to propel you forward and, therefore, the thighs, glutes, core, and calves are really working to drive your body,” he says.

READ MORE: 10 Steps To Becoming A Runner, According To Running Coaches

The second occurs via your vertical movement, or the load your muscles bear as you land during each stride. “On average, people place between eight to 14 times their body weight on their muscles in a single stride,” he says.

Not all runners reap the same muscle-building benefits, though.

As they does with any workout, your muscles adapt to the stress of running over time, which means the stimulus has less of an affect, says Higgins.

So, while your 30-minute jog might have provided enough stress to build some muscle when you first started lacing up your sneakers, that’s no longer the case when you could run your usual route in your sleep.

Bottom line: Newbies are most likely to reap muscle-building (rather than muscle-maintaining) benefits from steady-state running. “A beginner will rapidly improve week by week simply because they have gone from zero to 100, but if you’re already at 90 on that scale, to get to 100 is going to be very difficult,” Higgins says.

You can continue to build muscle with running — with the right strategy, though.

Just because experienced runners won’t continue to build muscle with the same old routine, gains aren’t totally off the table.

READ MORE: Home Workouts That Will Improve Your Running

How do you get those fast-twitch muscle fibres to light up? With running workouts that focus on speed (like sprints) or incline (hellooo, hills), says Higgins. By kicking up the intensity, you introduce a new stimulus to your muscles — and start seeing results again.

Try these three workouts (with an easy two kays as both your warm-up and cool-down) to keep building muscle with running:

FYI: Runners should still use strength training to build muscle.

Though higher-intensity running workouts unlock a whole new world of muscle-building potential, both Higgins and Pilkington recommend having a non-running workout routine dedicated to building muscle if you want to continue seeing results in the long-term.

FWIW, you should be tacking on at least two strength-training workouts to your cardio per week.

Not only should you show your arms, back, and abs some much-deserved love on the regular, but “strength training muscles like the glutes and hip flexors, extensors, and rotators also keeps gait muscles strong,” says Pilkington. Basically, building muscle totally boosts your running game from head to (sneaker enclosed) toe.